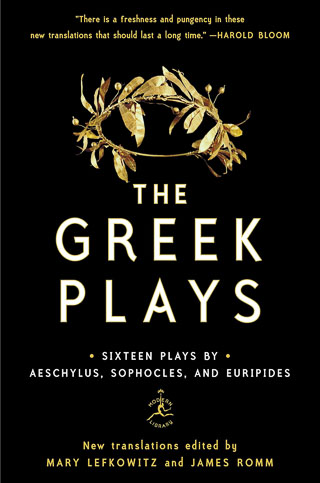 “(The palace doors open and Clytemnestra is revealed, standing
over two bloody corpses.)

CLYTEMNESTRA: Though all I said before was right for then,
I’m not ashamed to state the opposite.
How else would someone, paying evil back
to those disguised as friends, raise suffering’s net
around them to a height they can’t leap over?
I gave my full attention to this struggle
from far back. Victory came, though that took time.
Right where I struck, I stand, on my achievement
I acted—I’m not going to deny it—
to trap him so he couldn’t fight off death.
As if he were a school of fish, I cast
a rich robe in inextricable circles.
Twice I strike, and a double groan announces
his legs’ collapse. He’s fallen, but I add
a third, an extra blow, thank-offering
to Zeus below ground, savior of cadavers.
He falls, convulsively gasps out his soul,
and spouts a headlong slaughter-gush of blood,
striking me with dark-scarlet showers of dew,
and I rejoice, as in wet, quickened sowings
of Zeus’s grace, when buds emerge from labor.
If a libation for a corpse is proper
and right—and more than right—then this is it.
He filled this cup of curses for the house,
and drank it up himself when he returned.
So there you have it, honored Argive elders.
Be glad, or don’t—but triumph fills my heart.”