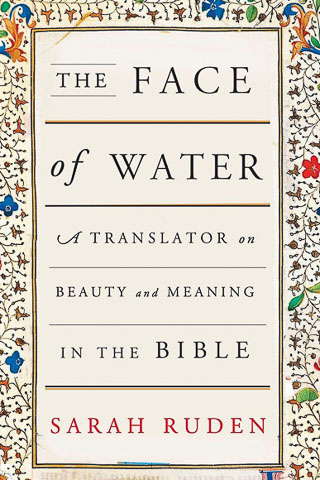 A Translator on Beauty and Meaning in the Bible

What does the Bible actually say? What kinds of experiences did the original Hebrew and Greek words express, and how? What is touching, tragic, funny, and inspiring in the Bible that English translations don’t show?

“Contains some of the most sumptuous words about the Bible that I’ve ever read…. Ruden reminds us of the loveliness of language and the joy that sacred words can deliver.”

“Mightily impressed with the Hebrew writer’s insight and craftsmanship (though I was only half-conscious of its details; I needed Professor Joel’s help later to know exactly what I had been looking at), I wrote the following:

I eat. The shattering waves have calmed the sea.
I’m going to him, he won’t return to me.

I worship, sowing grain across the sea.
I’m going to him, he won’t return to me.

Thus I became a translator of the Bible, sort of, and in doing that found myself reckoning more urgently than ever before with a critical circumstance of ancient literature: form and content are inseparable, and equally important. These languages were not like modern globalized ones, serving mainly to convey information in explicit and interchangeable forms—but with a dimension called ‘style’ for artistic uses on the side. Instead, the original Bible was, like all of ancient rhetoric and poetry, primarily a set of live performances, and what they meant was tightly bound up in the way they meant it.”