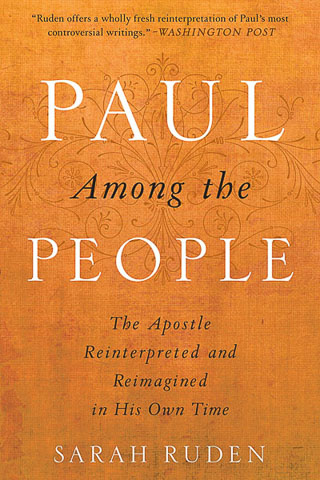 The Apostle Reinterpreted and Reimagined in His Own Time

One man did more than any other to consolidate and spread early Christian ideas. How did he think? What did he experience? What can he tell us about our own world?

“The most exciting book of historical analysis I’ve read in ages–indeed the most exciting book period… What makes reading Ruden such a pleasure, aside from the quality of her thinking and her prose, is her willingness to question settled truths, and to do it with such a lightness of spirit.”

“The last thing I expected my Greek and Latin to be of any use for was a better understanding of Paul. The very idea, had anyone proposed it, would have annoyed me. I am a Christian, but like many, I kept Paul in a pen out back with the louder and more sexist Old Testament prophets. Jesus was my teacher; Paul was an embarrassment.

But one day, in a Bible study class I was taking, a young woman objected to the stricture against sorcery in the ‘fruit of the Spirit’ passage in Paul’s letter to the Galatians. She said that to her sorcery meant ‘just the ability to project my power and essence.’ Most of the class gave the familiar sigh: Paul was kind of a brute, wasn’t he? I would have sighed too, had there not flashed into my mind an example of what sorcery could mean in a Greco-Roman context: the Roman poet Horace’s image of a small boy buried up to his neck and left to starve to death while staring at food, so that his liver and bone marrow, which must now be imbued with his frenzied longing, could serve as a love charm. Paul, I reflected, may never have read this poem (which depicts a crime that may never have happened), but it shows the kind of reputation sorcery had in the Roman Empire—certainly among people with a polytheistic background, who made up the main readership for his letters both during his lifetime and after it. I could not get away from the thought that what his writings would have meant for them is probably as close as we can come to their basic original importance, as key documents (prior even to the gospels) inspiring the world-changing new movement, Christianity.”