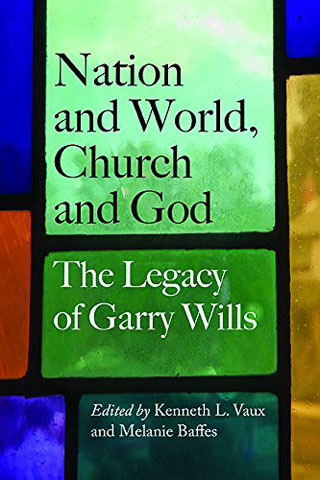 The Legacy of Garry Wills

“‘Peacemaking’: A Critical Inquiry in to a New Theology of Politics” by Sarah Ruden

“In 2000, the Zimbabwean president Robert Mugabe set out to hold power for a third decade by combining farm invasions with widespread political terror. The police, the army, ‘war veterans’ as young as their teens (many trained in special ‘youth camps’ to loot, rape, and murder) fell on victims ranging from stolen pets to opposition party leaders. The economic devastation extended to game reserves, industry, and public infrastructure. But the South African regime not only rejected even the options of verbal condemnation and diplomatic sanctions, but supported the visibly demented Mugabe, an admirer of Hitler, with an unlimited line of credit for electricity and oil imports, effectively supplying for free the means for the bankrupt regime to control what was left of the economy and continue the terror campaigns. In 2002, the South African government endorsed what was perhaps the most shamelessly stolen election in African history as free and fair.

In 2008, the South African president Thabo Mbeki, his reputation destroyed and his power crumbling over his handling of AIDS and the crisis to the north, made a decisive move: he was to be the peacemaker, the ‘mediator’ between the Zimbabwean government and the opposition Movement for Democratic Change (MDC). He deftly borrowed the language of the peacemakers: the talks he was going to sponsor would confer ‘the possibility to assist the Zimbabwean parties to finalize their negotiations so that together they can engage the work to achieve national healing and reconciliation and attend to the … reconstruction and development of Zimbabwe’.

For the MDC, the negotiations were brought about, conducted, and concluded under every imaginable kind of illegitimate pressure, from the mutilation and murder of a prominent MDC member to wild insults in the press—and included Mbeki’s unremitting favoritism toward the governing party, Zanu-PF. Whether Mugabe ever intended any good faith in the resulting ‘power-sharing’ agreement hardly mattered. Having been ceded control of foreign affairs and the gangster Zimbabwean army (as a sort of obscene joke, the MDC got the cabinet posts of health and finance, which carried with them the responsibility of repairing Zanu-PF’s worst devastations), Mugabe could have abided by the agreement and yet lost no critical power. Peacemakers hailed the agreement from its earliest stage and retracted none of their statements later.

For Mugabe, the agreement was the best of all possible ploys, occurring when his forces had become fragmented and demoralized, and lowering the volume of the international outcry for two years while he continued to persecute the opposition, with multiple killings resuming only weeks after the agreement’s provisions were finalized. He may now seek to reiterate on a much larger scale the genocidal purge with which his rule began in the early 1980s, the ‘Gukurahundi’ with its 20,000 victims—inhabitants of a region that preferred its own presidential candidate to him.

Those with a genuine interest in peace should be wary of peacemakers on other fronts, including Christian-Muslim, Arab-Israeli, and other East-West relations. Growing turmoil in the Middle East places the great powers even more on their guard against local self-determination, yet Western intervention (except for emergency protection against genocide) has probably never been more widely resented on the ground, as ordinary people face off with their U.S.-supported proxy rulers of decades’ standing, without the aid that civic organizations could give them, the rulers having kept these from ever coming into existence.

As with the South African clergy and clerical-minded academics, it is not because initiatives like those of the Common Word peacemakers are legitimate or commonsensical that they come into being: it is because they are not. The majority of the Common Word signatories and attendees at conferences are highly placed Muslim clerics (some extremely conservative, some actual theocratic functionaries) and prominent liberal Christians with little or no experience of the Islamic world. The conservative Muslims clerics’ natural interest in political liberation and liberalization is in stopping it; the Christians’ interest is in playing any statesmanlike role, from which their home polities exclude them. As with African peacemakers, the Common Word adherents’ publicly expressed reasons for coming forward—in this latter case amounting to ‘People have no real reason to fight’—is inane enough to certify them as either perfectly naive or perfectly cynical’.

Many people will find this essay outrageous, but what I find outrageous is that a translator of Latin and Greek and beginning biblical scholar was the one to write it. A lot of other people (some with impressive qualifications in theology and foreign affairs) could have argued what I have. I have asserted little but that clerics and academics (like other people) will in general do what it takes to get and maintain more than their share of political and professional power. It is just as true when the personalities, the institutions, and the ideologies are familiar ones we trust deeply. It is true to the extent that those claiming to be on peace missions may act as the unquestioning servants of the wars’ instigators. But as citizens of powerful countries, petulant inheritors of democracy from our ancestors, and pampered consumers of the world’s wealth, we can acknowledge that their complicity and their willful looking away are no more remarkable than our own.”