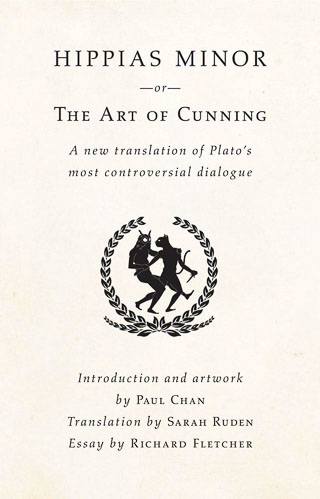 The Art of Cunning

“Agathos, ameinõn, aristos; beltiõn, beltistos: With these words, Plato pulls a fast one invisible to readers of ordinary English translations. Agathos has ‘good’ (which, when applied to a person, we normally understand as ‘morally good’) as only one of its meanings, which is rare until late in the word’s evolution. Ordinarily in Plato’s time and before, people favored the meanings ‘noble’ and ‘brave’ and ‘skillful’; I translate it as ‘excellent.’ Ameinõn and aristos, the comparative and superlative, follow that sense pretty faithfully—‘superior’ and ‘most excellent.’ But beltiõn and beltistos are another comparative and superlative branching from the same word, both of them less personal and more mundane, more suggestive of ethics—‘more fitting’ and ‘most fitting,’ I translate, marking clearly where Socrates simply changes the terms of the argument and is no longer speaking of qualities inherent in Homeric warriors but of qualities more proper to the Athenian way of life (yet Hippias is not shown calling Socrates on this). The kicker is that both superlatives are commonly used, and used in this dialogue, as polite (and sometimes politely sarcastic) forms of address. The difference is not arbitrary, and both should not be translated as ‘Sir’ or ‘My dear friend’.”